Tweet
Share
Share
Pin10
10 Shares
We're an affiliate We hope you love the products we recommend! Just so you know, we may collect a share of sales or other compensation from the links on this page. Thank you if you use our links, we really appreciate it!

Electric ride-on cars can be a buzzkill for your child when they stop working without notice. It would be helpful if you knew a few tricks on diagnosing and repairing your ride on a car whenever it stops working.

You don’t need any special tools to do some DIY diagnosis and repairs when an electric ride-on car is not working.

You also don’t need to be an expert to understand a toy vehicle ride’s inner workings. However, understanding an electric car’s workings can save you some repair costs from time to time.

Some of the repairs will take as little as 5-10 minutes to complete and get the car moving once again.

What Do You Need For a Diagnosis?

The most crucial tool in making an accurate diagnosis is a multi-volt meter to measure the current on the various electric ride on cars not working. You will also need a pair of pliers and a screwdriver if you have extensive repairs to do.

There are several ways to diagnose various problems on a ride-on toy vehicle. You will require a clean surface area to lose small pieces like screws, wires, connectors, or switches.

How to Use a Multi Voltmeter

You can buy a cheap one since they work the same. You need to set the voltage you are testing on a toy car and select a measurement unit. It can be 6V, 7V, or 24V, depending on your needs. Connect the red wire to the red terminal and the black one to the black terminal of a battery. You should be able to see the battery readings on display.

Most multi voltmeters come with probes that you can use to test the flow of current in wires. You can touch one probe to one end of a wire and attach the other probe to the opposite end.

You should hear the sound of an electric current flowing if the cables are functional. An inconsistent sound or lack of sound is an indicator of a faulty wire. Overall, a multi voltmeter is a handy tool to have if you own an electric toy car.

Understanding the signs of a problem in an electric car can save you a lot of time determining a problem’s source. Most parents think that a dead battery is the cause of all issues in electric toy cars. However, corrosions, a blown switch, a loose wire, or even rust can be the cause of why an electric ride-on car is not working.

A ride-on car may not be working when the power is low. It would be best if you recharged the battery as per the manufacturer’s instructions. A toy vehicle won’t go forward when the passengers surpass the vehicle’s maximum weight limit. A thermal fuse in most electric cars cuts off the power until the vehicle’s weight exceeds the maximum limit.

An issue with the gas pedal can also cause ride-on toy vehicles not to move forward when the battery is full. You can test the throttle of the car and listen to the response. There is most likely a problem with the wiring that hinders transmission when a child steps on the gas pedal.

If it is not a flat battery you could also have an issue with your charger.  Here are a few ways to charge a battery without a charger.

Replacing a dead battery is one of the most manageable maintenance tasks that a parent can do to get an electric toy vehicle working again. It would be best if you bought a replacement battery for the model of your ride-on toy.

Start by removing the dead battery and placing it in a safe location. Place the new battery in the vehicle’s compartment and connect the terminals to the car. Attach the red terminal to the red wire and the black terminal to the black wire. Start the vehicle when you are through to see whether the battery is well-connected and all systems are working as they should.

Some toy vehicles do not work even when the battery is in mint condition. You should check the connections in the system to whether there is a problem with power transmission. Start by popping up the hood and checking the link on each terminal. Corrosion or rust on one of the battery terminals can be the reason why your child’s favorite toy isn’t working.

Don’t forget to check the motor to ensure that it is functioning. A broken engine can be the root cause of your problems. It is simple to find a replacement motor online and do a DIY replacement at home.

Sometimes the elements of a braking system in the car can deteriorate. A brake isn’t something that parents remember to check during maintenance until it stops working. Lack of good brake pads or a broken piece in the braking system may be why it won’t stop.

Children are often rough when driving electric cars, and hitting something at the bottom of the vehicle affects the brakes. You need to replace any damaged parts and don’t allow your child to play with the toy until the brakes are working.

Most manufacturers do not provide batteries for electric toy cars in the initial package. Electric toy vehicle’s remote controls use either AA or AAA batteries. It would be best if you had some spare batteries in the house to replace dead batteries. If battery replacement doesn’t get a remote to work, you can try pairing it to the car again.

Ride-on cars have several connectors and switches that make up the wiring system of the vehicle. One broken switch or connector can cause a vehicle to stop working.

Use a multi-meter to identify the parts of the vehicle that don’t receive any current. Replace any switch or connectors that are damaged and confirm that the screws are on tight.

Also, carefully wave your hand above the battery and motor not to touch them but to see if you feel a lot of heat coming from them. If the motor is overheating please take the needed steps.

An electric toy vehicle’s wheel may not spin when the wheel’s retainers are tight, which happens after assembling the toy or a replacement. [One Wheel Spins] You need to remove the hubcaps and loosen the retainers a little so that a wheel can spin. Try spinning the wheel with your hand until you are satisfied that it will move seamlessly.

Another reason why a wheel won’t spin is when it detaches from the wheel axle. The axle ensures that wheels move in the same direction and at the same speed. Flip the card and connect the car wheel that isn’t spinning to the axle of the car. Test the vehicle to see whether the action solved the problem.

If you are still having issues please check out our full list of problems and solutions.

Many parents take Power Wheels and other electric toy vehicles to the garage for minor issues and pay a fortune for the repairs. It is fantastic for parents to learn a few diagnosis skills to learn how to find out what is wrong with a vehicle.

It would help if you had an affordable multi-voltmeter to test the system and see an adequate vehicle voltage. You can try diagnosing the list of issues on this list before taking a toy car to the garage. It will save you both money and time when you conduct a simple diagnosis at home. 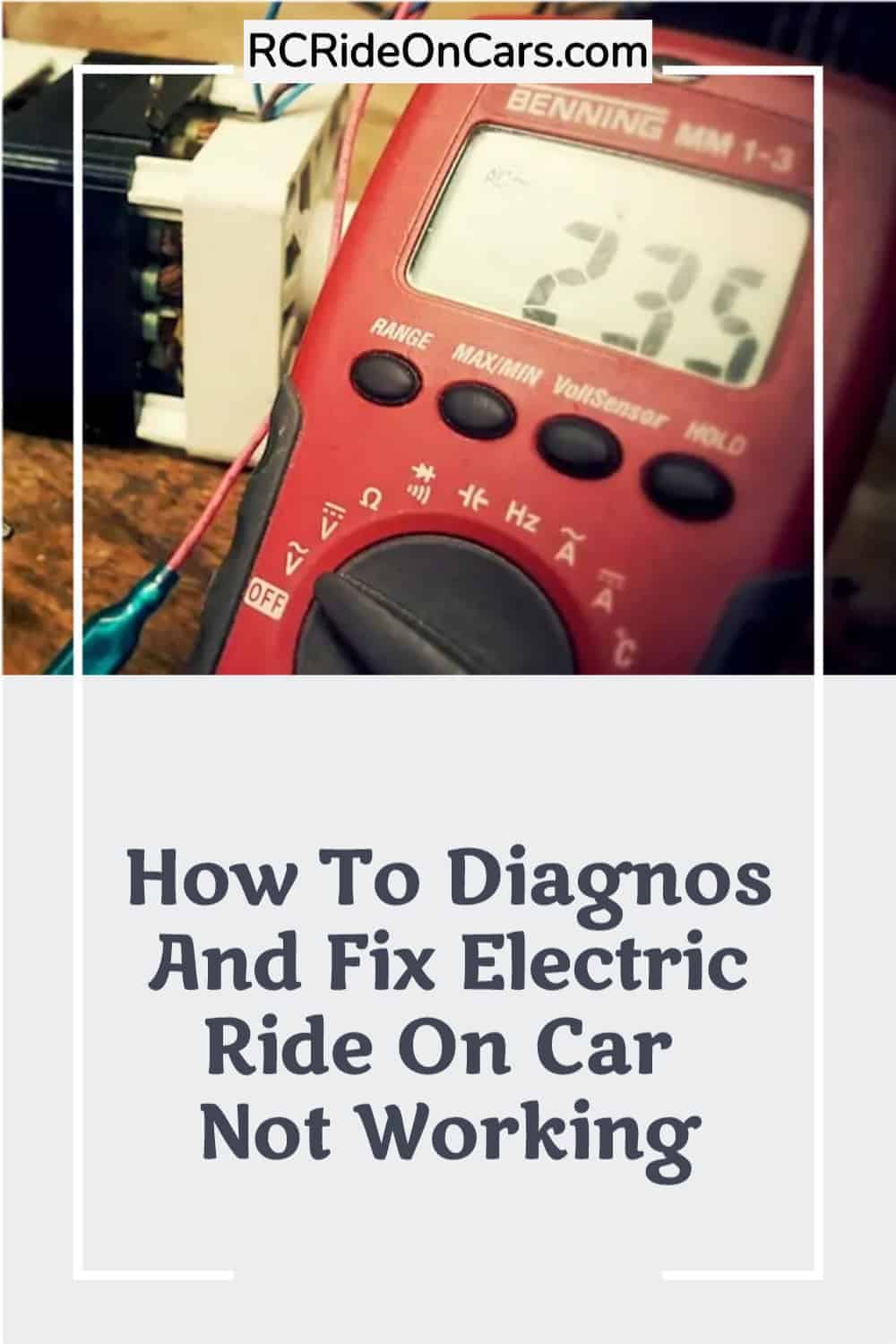 Please be careful and use at your own risk None of the authors, contributors, administrators, or anyone else connected with RCRideOnCars.com, in any way whatsoever, can be responsible for your use of the information contained in or linked from these web pages.

How Do Power Wheels Brake? | How To Install a Brake Pedal

How To Convert Power Wheels to Remote Control

How Long Does a Power Wheels Battery Run Per Charge

Kevin is the founder of RCRideOnCars. While watching my children drive around the yard on Ride On Cars with big smiles on their faces, I decided to start this Power Wheels site to help out everyone to make sure they get exactly what they are looking for.

You can see more of my RC RideOn Cars on YouTube and Pinterest, links below.  Read all about us.

Kevin is the founder of RCRideOnCars. While watching my children drive around the yard on Ride On Cars with big smiles on their faces, I decided to start this Power Wheels site to help out everyone to make sure they get exactly what they are looking for.

You can see more of my RC RideOn Cars on YouTube and Pinterest, links below.  Read all about us.