Can you Fix a Dead Power Wheels Battery? | Bring it Back to Life

Dead Power Wheels Batteries can happen for a number of reasons, and it’s important to take the time to diagnose what has happened. It is possible that your battery needs a jump start, or you may need to replace it altogether.

If you’re unsure how to do this, we’ll walk through the process step-by-step, so you know what to do when these situations arise.

Why Does A Power Wheels Battery Die?

A Power Wheels battery may stop functioning for various reasons, which include:

A completely discharged battery is prone to sulfation, the process by which lead sulfate crystals build up on the plates and reduce battery capacity.

If you don’t have time to charge your Power Wheels before going on a long trip, it’s best to drive for just a few minutes so that the battery doesn’t completely drain.

Overcharging a battery can reduce its life and cause it to go dead.

To prevent this, unplug the charger when the battery is fully charged (most chargers will turn off automatically).

A battery should never be charged for more than 15 hours at a time. Turn off the charger after 15 hours if you plan on leaving the battery in to charge overnight.

If you use a fast charger for slow charging batteries, it will shorten their life. Always ensure that the correct settings are selected on your battery and charger to avoid this problem.

If in doubt, don’t charge until you have contacted an expert.

As batteries get older, they become less efficient. A battery that loses its capacity will have to be charged more often and may not last long enough for you to enjoy your Power Wheels toy fully.

It’s important to replace an aging battery with a new one before it discharges completely, or else the vehicle could stop working altogether in some cases. You can also try a drill battery upgrade.

Not that a Power Wheels battery isn’t necessarily dead if it’s not functioning well. You can easily revive the battery and get it working just fine.

How to Revive a Dead Power Wheels Battery

To bring the battery back to life, follow the following steps:

How to Prevent a Power Wheels Battery from Dying

To prevent a Power Wheels battery from dying, we recommend the following:

Do not overcharge the battery

The battery will die if charged for more than 15 hours, as previously said. Be sure that your charger automatically shuts off after a few minutes once the charging cycle is complete.

Do not overuse the battery

Do not drain an old Power Wheels battery completely before recharging, as this can also lead to sulfation which shortens its lifespan.

Keep the battery in a cool and dry place

If you live somewhere very hot, ensure that your Power Wheels battery is stored where it will not get too warm. In addition to reducing its life expectancy by causing sulfation, extreme heat can also cause damage if left unchecked.

So keep them out of direct sunlight and away from heat sources such as motors or heating vents.

By doing so, you won’t have to worry about entirely killing the battery. Having it charged and ready to go can also help you avoid forgetting to do so.

Doing this will help counter the natural discharge rate of the battery so it doesn’t die. Also, be sure to charge the battery before you use it again.

How Do You Test A Power Wheels Battery?

To test a Power Wheels battery, you will need a voltmeter. You can use the traditional needle-style one or a digital voltmeter.

Power Wheels batteries have a voltage rating of 6 volts, 12, or 24 Volts, depending on the type. For this test, you will need to check the voltage across both terminals using a voltmeter after disconnecting it from any charger and toy that may be connected to it.

Before the test, be sure to charge the battery for at least 8 hours. If the battery is dead, follow the steps above for bringing it back to life before proceeding with the test.

Locate the positive and negative terminals of the Power Wheels battery. Turn the voltmeter’s dial to the DC (direct current) section and adjust the setting to 20.

If the reading of your battery is 12.6V or higher, then it is fully charged. If it is below 11.8V, then there could be a problem in one of the battery’s cells.

Also, if the reading is lower than 10V, it’s time to start thinking about replacing your battery.

Sometimes your charger may be the one malfunctioning and not your battery. So just to be sure, you will also need to test the charge.

Plug it into an AC outlet and connect its terminals to the respective terminals of the voltmeter and note down the reading.

A well-functioning charger should give an output of between 13.5V-14.5V. If the reading on the voltmeter is way higher or way less or zero, then you might want to buy a new charger.

Note that a charger that is too old will also not charge your battery properly. So if you have had the same charger for years, it’s time to buy a new one because the chances are that it has lost its efficiency and won’t be able to recharge your dead Power Wheels batteries anymore.

Did you know you can also calculate how many amps a Power Wheels draws?

Your Power Wheels battery may die for various reasons. However, reviving the battery is easy as long as you follow the steps above.

It is, however, advisable to always try and prevent the battery from dying in the first place because, even after reviving the battery, it may be too late, and the battery may have already lost some of its efficiency. 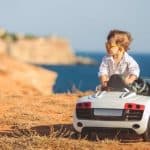 Why are Power Wheels Hard to Drag & Put Away

How to Remove Yellow from Clear Plastic on Power Wheels