How do Power Wheels Work?

Power Wheels are a popular toy for children and can provide hours of fun. But how do they work?

This article will discuss the science behind Power Wheels and teach you how to make your own electric car.

Power Wheels: How they Work

The basic components of a Power Wheels vehicle must be understood before one can grasp how these toys function. The battery, the motor(s), and the speed controller are the primary parts.

The most important part is the battery which powers everything in your Power Wheels car. Most Power Wheels vehicles use 12-volt batteries – some large models may even need two or three batteries.

These batteries provide enough DC power to the motor for up to an hour, depending on how fast you drive. Most Power Wheels vehicles use sealed lead-acid batteries, which are very similar to car batteries.

Next, we’ll talk about what’s keeping everything running: DC electric motors driven by batteries drive Power Wheels. Belt or gear reduction is commonly used to power the motors. Estimating the top speed of a fast Power Wheels car is difficult, but you can probably count on it being between two and five miles per hour (MPH).

This crucial component of your car controls how much power gets to the motor. It would be exceedingly challenging for kids to drive their vehicles if there was no speed controller.

So How Do Power Wheels Work?

To activate the toy, one often turns a key or presses a start button. When the ignition is turned on, the electrical system comes on and draws power from the battery to run the car’s motor.

The battery converts energy available into 12 V DC to operate the motor.

In order to regulate the power supplied to the motor, several Power Wheels models employ a DC-DC converter.

After the motor is turned on, the quantity of power going to it is controlled by a speed controller. This slows down the cars to a safe speed for children to operate, reducing the likelihood of accidents.

Both a foot pedal and a handbrake operate the vehicle’s braking mechanism. The child driver can safely come to a halt thanks to the car’s brake mechanism.

The motor is slowed when the brake is applied because the force is transferred to it.

The Power Wheels’ gear mechanism can be engaged with the help of a shifter. When the gear is changed, it affects the motor’s connection to the gears and the speed at which they spin.

Most Power Wheels only have two speeds, forward and backward. Still, the speed may be adjusted as needed thanks to the speed controller, which regulates the amount of electricity supplied to the motor.

Most playthings have multiple speed settings.

To complete the set, we installed a steering mechanism that gives kids full control over the vehicles they drive. Normal Power Wheels have the steering wheel attached to the front wheels.

Are Power Wheels easy to operate?

It’s true that kids may have a lot of fun with Power Wheels and that they’re simple to use. They can be operated either manually or wirelessly.

Using a remote control, parents may now transport their children using Power Wheels. Either a separate remote control or an app on your smartphone with Bluetooth capability might be used for this purpose.

How long can Power Wheels run on a single charge?

How long Power Wheels can run on a single charge depends on various factors, which include:

The voltage rating: The higher the voltage rating of the battery, the longer it will last. On average, 12-volt Power Wheels will run for 20-50 minutes before recharging again.

The speed of the car: The faster you drive your car, the more power is required to keep it moving, which means that it will run out of battery life faster.

The age of the motor: Over time, motors will wear out and may not have as much power to them, which means they won’t be able to drive a car as fast or for as long without recharging.

The age group: Older children tend to drive faster, which means their cars require more current than younger kids who drive slower or not at all.

Power Wheels may sometimes stop working properly because of various reasons. Here are some of the issues that may occur and how to troubleshoot:

This could be due to a dead battery or faulty wiring. Check if the Power Wheels turn on when you press the start button or key; if it doesn’t, your battery is dead and needs to be charged.

Make sure that all wires are connected properly, which includes the positive cable, negative cable, and clamps.

It could be due to a faulty speed controller or motor. Try unplugging your toy for 20 minutes before plugging it back in again after checking that none of its parts have gone loose during storage or transportation.

It may also help to switch out with another part, so see how it works afterward. If this does not resolve the problem, try replacing both components at once as they might both need replacement instead of just one of them.

Power Wheels not going in reverse

This could be due to a faulty brake switch or wiring problem. Try replacing the brake switch and see if it works; after that, ensure all wires are connected properly from the battery to the throttle controller, which is on top of the toy’s motor.

This problem may occur if you are using the wrong battery. The voltage rating of the battery should match that of the toy. A 12-volt battery will be too powerful for a six-volt motor which is why it overheats and damages your toy’s motor as well as shortens its lifespan.

The problem may also occur if it is broken or cracked. Also, modified tires can cause overheating, as does use a tire that is too small. You can resolve this by checking the condition of your toy and replacing any broken or damaged part which may be causing it to overheat.

This could mean there’s something wrong with the battery, wiring, and/or charger unit itself. Check if the battery is connected properly to the charger and if it seems loose or damaged in any way.

There could also be a problem with the charger itself, which could mean it is broken or not working properly. You can switch out with another charger to see if the problem persists; otherwise, you will need to purchase a replacement.

This could be due to dead or overused batteries, so try replacing them with new ones before giving up entirely on using your old Power Wheel toys again. You can also check how corrosive materials have been used by children when playing with their cars because some things, such as oil, may cause rusting damage after long periods of time.

Grinding noise when the toy moves

This can be the result of stripped gear. Finding it is straightforward. Get rid of the tire closest to the noise.

The gearcase clearly has it. Just look inside. Opening the gearcase won’t put you in danger of a spring breaking. (Hint: The next gearcase will likely be stripped soon after the first one. It’s time to swap them both out.)

Both of them should be replaced.) Gearboxes generally fail as a result of an outside influence. If you don’t address the problem, you’ll have to strip the next gearbox again.

Power Wheels shuts off and restarts after a few seconds

When stock Power Wheels batteries get old or are subjected to an increased amp draw, they become bloated. The internal 30-amp circuit breaker trips and restarts.

Examine the rear axle for straightness and ensure that the wheels turn freely. Reduce the weight of the vehicle. Tall grass should be avoided.

If your Power Wheels toy car is experiencing any of these issues, it probably only needs some TLC or a new part, both of which are easily obtained and inexpensive.

If you follow these steps and tips, it will be easier to troubleshoot issues with your toy cars. 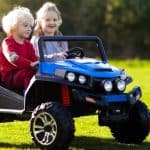 Can You Use Any 12 Volt Battery In A Power Wheels? 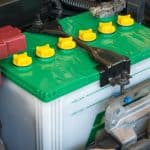