Are Ride On Toys Battery Powered?

Yes, most of them do use batteries.  The most common batteries are the 6 volts, 12 volts, and 24 volts though they go up much higher. Ride-on car batteries have a design that can handle multiple recharging sessions during their lifespan. On average, it takes about 10-14 hours to recharge the batteries that will run for 1-2 hours.

Now that you know they are battery powered ride on toys, know if the electric car uses a 6V battery, it must use that 6V battery and not a 12V battery unless you do some modifications.

One thing that people wonder about ride on car batteries is the Ah levels.  Ah stands for amp-hours, and it doesn’t have to be the same as what the current battery has.

Ah is very important because this is basically how long the electric toy will last before the battery needs to be recharged.

There are other types of Ride On toys classified as “exotic” ride on toys that do use gas.  You won’t find this too often unless you are looking for an older child.  Most Ride On Toys are for kids between the age of 3 years to 8 years old.

Of course, there are some exceptions on the electric cars with the larger batteries like the 24 volts, 36 volts, and even the 48 volts.  For some reason you won’t find many of these on Amazon; they seem to only carry 12 volts and some of the 24 volts battery powered ride, but Walmart does have some higher models.

When it comes to Volts on the battery the higher the volts the more powerful the battery.  The higher volts will put out more power hence making the electric cars move faster.

If you have a younger child you won’t need anything more than a 6V battery as you want to keep them safe. However; if they will be driving on grass you will need a 12 Volt battery powered ride.

Another good thing is most of the kid’s electric cars come with a remote control so you can stop the toy car if needed or even turn the direction it is going.  While we are on the subject of batteries, these remotes are nice but the batteries are not included the majority of the time.

The remotes usually have a slower speed you can put it on as well for new and younger riders then as they grow you can switch to the higher speed.

Remember though it has to be the voltage that the kid’s electric car is set at or you could fry the electronics. If you are running them in parrel it will provide a longer-lasting battery but it isn’t truly a 12v battery.

Ride-On Toys batteries have a chance of exploding or catching fire, especially when in contact with metals.  Making sure to store the battery away from metal and in a cool dark place is best.

Overall something like this is very rare to happen unless handled incorrectly.  We recommend reading over “Are ride-on cars safe?” for more safety measures and making sure to assemble the ride on correctly.

How to correctly charge a Ride On battery

Since Ride On Toys is battery powered you want to make sure you don’t overcharge the battery.  Check with the manufacturer they will give you a guideline to follow.

Keep in mind the first charge is always longer than all the other charges and you can’t just keep it plugged in all of the time or this will hurt the life of the battery.

If you don’t use the battery-powered ride for a while make sure to recharge it as well.  This could be another way of causing some issues with the battery.

It is recommended to charge the vehicle to full if you haven’t used it in a 2-month span.

What is the lifespan of a Ride On Toys battery

The lifespan of a Ride On Toy will definitely depend if you charge the battery correctly as mentioned above but most batteries last about two years.  If you take care of the battery it will last longer than usual.

Keep in mind every time a battery is charged a certain amount the actual battery inside shrinks a little and the next time it can’t hold as much charge.

You probably notice this mostly with your cell phone, the battery is amazing when you get a brand new one than a year later it’s not as good, 2-3 years later you are attached to a leash all the time because of the phone has to be constantly charging.

The good thing about ride-on cars is you can replace the battery very easily unlike a mobile phone. Making sure you store the battery correctly when not used for a prolonged period of time can really help the lifespan as well.

When the lifespan of the battery comes to an end, please make sure to recycle the ride-on battery.

Does speed of the Ride On Car affect the battery?

Features like going faster on the Ride On Car will definitely affect the battery and drain it quicker.  There are other things that cause the battery to drain faster which is the current weight that is on the Ride On.

How to improve driving time with a Ride On battery

The best way to improve driving time is to make sure you get a battery with high Ah (amp-hours).  That will give the battery a longer run time.  The higher the Ah the longer the battery will last.

Alternatively, I would recommend purchasing a second battery and a second charger.  This way when the battery dies and your child starts to cry you can simply swap out another battery and put the drained one on the charger for next time.

The prices on most of the batteries and chargers are not too bad either.  I have created a full battery and charger replacement guide if you would like to take a closer look.

As mentioned batteries do shrink over time and eventually it will be time to replace them if your child doesn’t outgrow the vehicle first.

A few signs of a battery ending its life cycle is the ride-on toy may not go as fast or for as long of a period of time.  A battery for ride-on cars usually lasts about 2 years.

If you notice it is sluggish and then later the electric car won’t even start, then the batter will need to be replaced.  Following the guide above will get the most time out of it for you.

However; there is also a way to fix a dead Power Wheels battery.

How to replace a ride on battery

Well, the great thing is we have created a full guide on which battery, charger, and wire kit to get if you are in need of any of these.  I have found the best batteries for the buck and unless your vehicle is a Power Wheels or Peg Perego you will find the prices more than pleasing.

Fisher Price Power Wheels also have replacement batteries on that guide though Fisher Price batteries are more on the expensive side.

Here is the full list of accessories you will need just scroll down till the brand you are looking for is shown.  We don’t only have comparison tables but a full guide below as well to talk about what electric cars they will fit in..

As far as physically replacing them you should check with your owner manual or with the manufacturer.  Every ride-on toy is different and you may need to remove parts of the car like the seat to get to the battery.

Batteries are what powers the world and kids electric cars but they do have to be treated correctly to get maximum enjoyment out of them.  Following this article should help prolong the battery life of your electric car to make sure your kids have it while they are the correct size to use them.

My goal is to hope this article helped make the joy and ride-on toy last a bit longer. 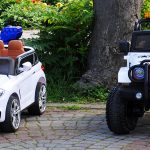 What’s the Difference Between 12V and 24V Cars For Kids? 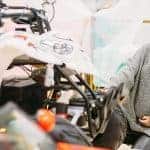