How do Bumper Cars Work? | All You Need To Know!

If you are wondering how do bumper cars work, you are not alone. I found this to be a very interesting topic to talk about and figured I would explain it on our site!

Lots to dive into so let’s get started.

Most bumper cars work by a complete circuit of positive and negative effects. This is done through the floor or the floor and ceiling, creating polarity. The power is then picked up by metal brushes under the car and into the electric motor, which will move the wheels forward.

Bumper cars go by a few names, like dasher cars, but the main two names are bumper cars and dodgem cars. Bumper cars were not originally designed to be bumped. That is why the name dodgem cars became popular, as you were supposed to try and dodge the other cars.

They also have a resistor in the motor. That way if the car stalls, the motor won’t blow out.

Most people don’t know there are 3 different types of bumper cars and they all work a bit differently. Let’s break this down even more so you can find how the solution that works for the bumper car you are driving.

3 Models of Bumper cars and how they are powered:

This type of bumper car is the very first one that was created. These bumper cars are easy to identify as they have a pole out the back that is touching a ceiling grid.

They can also be referred to as OHS (Over Head System).

This together provides electricity for the electric motor. This will draw power which will move the car forward.

The bottom of the car will have metal brushes that help the power to be received by the motor so the vehicle can move.

This makes it so bumper car drivers can continue moving forward as long as they stay in the bumper car arena. If the pole stopped making contact with the ceiling, the car would stop.

Operators can also force the bumper cars to shut down by turning off the electricity to the floor and ceiling grids. They will do this in case of an emergency or when the ride time is over, and it’s time to explore the theme parks some more.

They can also be referred to as FPU (Floor Pick Up) system.

How this works is there are metal strips that conduct negatively and positively with insulating spacers between them. As long as the bumper car is long enough to cover 2 of these at a time, it will provide electricity to the motor, and the bumper car riders can fly around the track.

Battery-powered bumper cars work similarly to ride-on cars. They have a battery, usually between 12 volts to 48 volts, that need to be charged.

The charging can take a while and the battery may only last one to two hours, depending on the size and amperage. The reason people will use these types of bumper cars is because of space.

Most commonly used on cruise ships as the space is very limited, and you can only use it for a few hours before needing to be recharged. At this point, the space can be repurposed for other fun events while they charge.

They don’t have the amusement park physics as they are just controlled by the battery, so a special floor or ceiling is not needed.

Bumper Car Steering Wheel is Not What You Think!

The bumper car steering wheel is amazing to operate and can turn 360 degrees unless the operator puts a pin in to limit this option. Keeping the steering wheel straight, the car will continue to move forward.

Turn it a bit to the left, and you will now move forward and to the left. The cool part is if you are going forward and turn the steering wheel in the opposite direction you will then be going in reverse!

It’s such a cool concept, and most people don’t know how much fun this can be when the driver is going in the wrong direction. This helps you sneak up on people and maximize the speed and force to hit other cars.

Don’t worry; the bumpers will protect you from the hard impact.

What Are the Bumper Cars Made out Of?

At the start back in the 1920s, they made bumper cars out of tin. This didn’t do so well when people kept having collision after collision.

By the end of the 1950’s, they then changed the body type to fiberglass. For the most part, today, they still use fiberglass for the body and then rubber for the large bumper.

They have an electric motor and a gas pedal or lever to start to move. When you press this, it will complete the circuit and start to move the car.

The bumper cars also have 3 wheels, 2 in the back and 1 in the front. The 1 wheel in the front is usually larger and can be made out of rubber, nylon, or steel.

The reason they only have 1 wheel in the front is so the steering wheel trick mentioned above works so you can do a 180-degree turn.

For the most part, they are safe. Keep in mind anytime you have bumping cars hitting each other, it can give you a bit of a shake-up.

With the large rubber lining around the car and seat belts, this is minimal. Not to mention, there are not many large areas where bumper cars can gain enough speed for this to happen.

The second largest one ended up putting an island in the middle to slow people down, and the largest one has been shut down since 2008.

Now that you know about how bumper cars work, you may wonder, can I get shocked? This answer is different for each model of car, so I’ll break it down for you in detail.

To get shocked on a sky grid, you would need to have your feet on the floor and your hands on the ceiling above. This may sound easy enough, but there is more to it. You have to be tall enough to reach the ceiling, and it has to be touched with your skin.

If you are wearing sneakers, the rubber bottom of the shoe is enough to protect you; the rubber acts as a protector from shock. If you were barefoot and touching the ceiling, you would experience a small shock, and if the ride was turned on.

The operator will make sure everyone is in their cars, and no one is walking around before they even turn the voltage polarity on.

I go over this answer in more detail in the article do bumper cars get shocked?

To get shocked on this one, you would need to be barefoot, and one foot would need to be on the positive condenser and another foot on the negative effect condenser. The operator would also have to have the ride powered on.

With a battery-powered bumper car, riders don’t have to worry about a shock at all as long as they are not playing around with the internal wires of the car, which they shouldn’t have access to.

Why Do People Enjoy Bumper Cars?

People love when bumper cars collide. This temporary physical jolt gives us an adrenaline boost. It’s also great to avoid another bumper car, especially if the person driving it is larger than you.

If you are going the same speed and distance as another person of the same size, the bump will be the same. However, if the person is larger than you, they will bump you a lot harder than you bump them.

The only way around this is for you to get more speed than them which is difficult because most of these arenas are small, and bumper cars can reach speeds of only 6-8 miles per hour.

To learn more about this, make sure to check out the physics:

Newton’s 3rd law of motion: Law of Interaction: Every action produces an equal and opposite reaction.

Still, bumper cars run into each other all the time, and it is very enjoyable. They do have large rubber bumpers made of special rubber linings that protect you and the car.

You shouldn’t have to worry about getting injured unless you are very tall. The shock could affect you a bit more. Most places will have signs advising not to have the bumper cars collide directly into each other though most people ignore this.

They also do come with seat belts, some are up to date with the five-point seat belts and others will just have an over-the-lap seat belt. No matter what they offer, you always wear seat belts.

How do I go in reverse with a bumper car?

To go in reverse, you would need to turn the steering wheel completely around 180 degrees. This will turn the front wheel backward, allowing you to go in that direction.
Some rides add a pin, so you can’t do this.

Do bumper cars have seat belts?

Absolutely, they will have seat belts to help protect the rider but most commonly to keep the rider inside the car when they are moving.

Why does a bumper car ride smoothly?

This is because the operator of the ride will sprinkle graphite down on the amusement floor. This helps decrease friction and keeps everything moving forward.

Will a bumper car work on the road?

A bumper car will not work on the road unless it is a battery-powered one. Most of these dashing cars are powered by polarity and need a negative and positive charged force to operate them.
This is why they have special tracks built for them in amusement parks.

What other types of bumper cars are there?

Another popular bumper car is battery-powered, and it’s for young kids. These bumper cars light up and have a joystick to move around.
It’s great for a small child that is just learning to walk and needs a break. They just ride around, bumping into everything.
They do a great job designing these with lights and even personalized numbers so they can have the number that works best for them. You can even put their age if you want.
I have done a full review with baby bumper cars if you want to see more, they are really affordable, and the kids love them. If you have more than one, they work even better as you can pair them up, and they can bump into each other with minimal pressure as they are designed for younger kids.

All the bumper cars you learned about have one big thing in common, they are a lot of fun. These vehicles have come a long way and now have the professional manufacturer to keep the car safe for the driver and others around.

Of course, next time you are at an amusement park, wear seat belts and keep your whole body inside the car at all times. 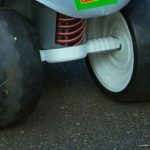 How to Fix Cracked Power Wheels Tires in 4 Steps

Why Do Bumper Cars Not Get Shocked 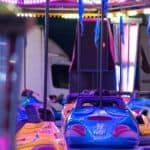