Do Bumper Cars Have Brakes? | Do They Stop When They Hit Eachother?

Bumper cars can really fly around the bumper car arena if they can get enough speed. It may come to your mind, do they have a brake system installed?

Let’s break it all down in this article so you know exactly how they are able to stop.

Bumper cars do not have brake pedals, to stop you simply let off the accelerator pedal and the vehicle will come to a slow stop. Another way to stop is by bumping into another bumper car, the ride ending, or by turning your steering wheel 180 degrees it will cause the car to go backward.

Do Bumper Cars Have Brakes?

A bumper car ride can really get going if they have enough clearance and are able to not collide with other cars. However, they do not have a brake pedal, as you would think.

They brake similar to other electric cars like Power Wheels. When pressing down on the gas pedal this will complete circuit sending the vehicle forward.

When the gas pedal is no longer pressed, the electricity stops flowing and won’t move forward anymore. This acts as a brake itself as there is no more forward movement, it will stop. If going at a decent speed, it may coast to a stop and not brake immediately.

This isn’t a big deal since they are bumper cars and are used to bumping into things causing them to go in the opposite direction and safety slowing down.

What Is the Best Way to Stop a Bumper Car

If you are moving at a fast speed and want to suddenly stop the bumper car just let your foot off of the gas and it will slow down. You can move the steering wheel 180 degrees and even move backward.

The best way to stop is by using the front-end bumpers and simply bumping into another car. The jolt will stop the speed and move the vehicles in reverse a bit. You can also bump against the wall.

Another way to stop is by the operator of the amusement park stopping the ride. All the bumper cars will then come to a stop since there is no longer any power.

How do bumper cars work?

At an amusement park, they sometimes call bumper cars, dashing cars. A dashing car was an early name as they weren’t meant to bump into each other.

The basic working principle is that the bumper cars are powered by the ceiling grid that has electricity running through it, though you do have to complete the circuit with the floor. This is the basic idea, though we have a full article that goes into detail on how bumper cars work.

How do bumper cars move?

These hot rods can really go, people often ask, do bumper cars have wheels? You can find out in that article.

They do basically move because they are powered. You won’t see a bumper car in the street though as they need to use the amusement equipment to draw power into the vehicle.

Once the vehicle leaves the area that has a charged ceiling grid it will simply stop and not be able to move since it has no more power. Of course, the floor does help complete the circuit allowing them to move.

As you can see, it’s easy to stop in these bumper cars, but they don’t actually have a pedal to press to stop. Simply enjoy the ride and make sure you bump into who you can to ensure you take first place assuming it’s also a race.

Good luck and have fun with this youthful ride! Thanks for reading. 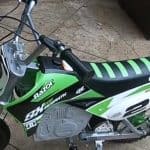 Do Power Wheels Have Seat Belts? How to Upgrade Them 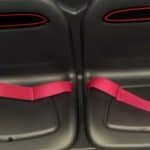